Think Aqaba. Think Lawrence of Arabia and that wonderful scene in David Lean’s iconic film with Peter O’Toole, in full Arab regalia, astride his camel, shouting ‘tut, tut, tut’ as the Arab tribesmen gallop across the desert toward the unsuspecting Turks, holed up in their impregnable fortress, overlooking the Gulf of Aqaba. Or Omar Sharif, making his screen debut, emerging from the shimmering mirage and shooting Lawrence’s manservant dead for daring to take water from his tribe’s well. Shooting a man dead for simply filling his satchel with water would appear abhorrent to the average Westerner, regardless of the time setting. But venture out into the desert around Aqaba at the height of summer when temperatures exceed 122°F (50°C),  and you will understand that water is the life-blood of this region and its scarcity is a perennial problem, exacerbated by the increasing demands of Amman and its voracious consumers.

And yet it is water that attracts businessmen and tourists to this town, which has grown from a small fishing village to a city of 110,00 people in less than 20 years. Jordan, for all its size, has a coastline of only 35 kilometres, all of which is around Aqaba and 20 kms of which was purchased from Saudi Arabia in the 1960s. Its only port and container port is there and seventy five percent of all trade into and out of the country passes through here. It has even designated a special authority, ASEZA, to supervise its development and this has become one of the most powerful institutions in the land, with its huge Kafkaesque building dominating the skyline.

It is, however, its crystal clear waters, together with its year-round warmth that attracts tourists, Jordanian and foreign alike. As Amman shivers, like the rest of Europe, through the coldness of winter, it is still possible to swim in the sea, to imbibe the refreshing sea air or to indulge in the one of its luxury hotels hugging the coastline. The government is implementing extremely ambitious plans to move the existing port down the coast near the Saudi Arabian border and to transform the waterfront into a major real estate and tourism project funded by Abu Dhabi investors, making this the Monte Carlo of the Middle East. 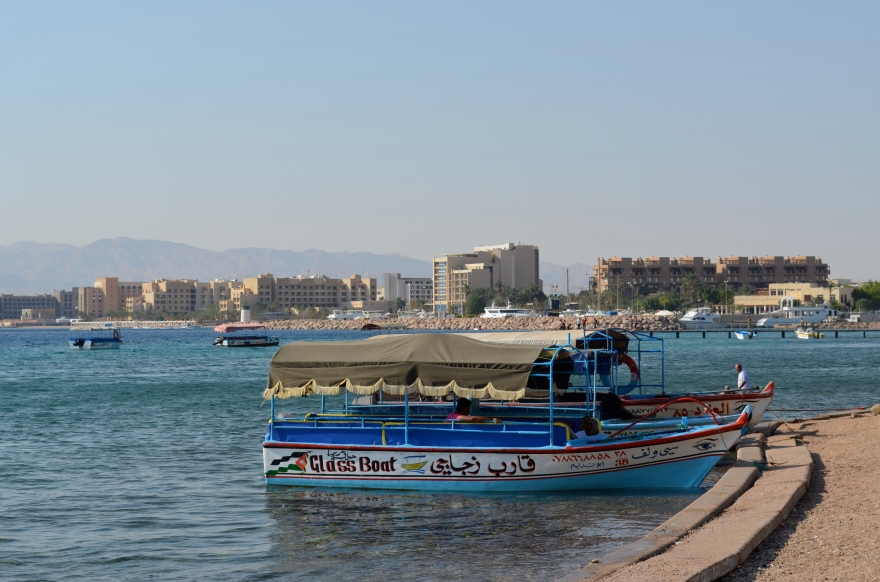 What to see and do in Aqaba

So what are the attractions of Aqaba? It has a beautiful climate if you avoid the intense heat of July and August. Its luxury seaside hotels like the Intercontinental, the Movenpick, the Kampinski and further up the coast, the Tala Bay and the Radisson, all have secluded beaches and private diving facilities.  Some of the best diving sites in the Middle East are all along its coastline. There is easy access to Wadi Rhum- a UNESCO World Heritage Centre- offering a landscape of almost lunar proportions, and of course the wonderful Nabathean City of Petra only a hour and a half -hour’s drive away up the Desert Highway.

While the town may be in need of a facelift, the old fort is still standing by the waterfront and a visit there will take you back in time and conjure up images of marauding Arabs attacking from the desert. Even the old execution chamber is still standing replete with its wooden hanging beam and the old ornate doors are testament to its past. Nearby is the promenade overlooking the public beaches where fishermen and glass bottom boat owners vie for business. Renowned for its seafood, you can dine by the waterfront at the Royal Yacht Club on the marina or in the beach restaurant at the Movenpick and indulge in fresh hammour and seabass.

Aqaba is also in a unique geographical location with Israel’s pristine resort, Eilat, just across the bay; the Sinai and its key resort of Taba, just a 45-minute hydrofoil ride away, and just down the coast, Saudi Arabia.

It’s only 35 minutes by plane from Amman to Aqaba but it is like entering another world. Gone is the congestion and oppressiveness of Amman and in its place is peace, tranquility and a town where everything slows down and swallows you up in its charm. Try it and relax.

The article originally appeared on Viator.com