Petra, Jordan-One of the Seven Wonders of the World

I had organised everything to perfection. The Petra Palace booked on the Internet and only a stone’s throw away from the main site entrance; the JETT bus times confirmed with the pretty Jordanian girl at reception; and the taxi booked with plenty of time to spare to catch the 9am bus south. I had even driven past the JETT office in Abdali to make sure that I knew where it was. I had packed the night before and my bags were ready at the door. Nothing could go wrong. 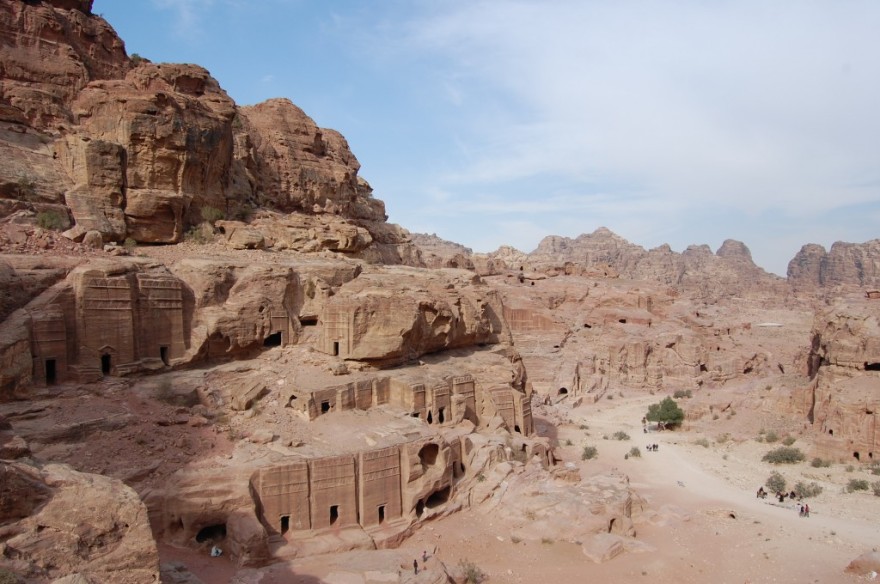 The Adventure is in the Journey

We duly arrived at the ticket office only to be told that the bus had left at 6:30am and that was the only bus of the day. It was always this way, we were told. 6:30 there and 16:30 back. We walked outside disconsolately trying to consider our options only to be rescued somewhat miraculously by Abou Mohammad. He seemed to know exactly where we wanted to go and for the small sum of 75 JD, agreed to get us there in 3 hours. Either he had psychic powers or some conspiracy had been hatched.

For the first half hour, he smiled and talked continuously. About his 11 children, about him being a local celebrity, about the good price he could give us for showing us all the tourists’ sites, etc. He even handed us a somewhat tatty book in which he had a chapter devoted all to himself. He played loud music in Arabic and English and drove the car with his knees as he answered numerous calls on his mobile. He was about 50 with grey hair and a mass of cold teeth. Fortunately, we both fell asleep and I presume he did the same. Three hours later we arrived in Wadi Mousa, bid him goodbye and breathed a sigh of relief despite his attempts to get him to wait until the next day for a good discount price.

The Magnificent Sites of the Rose-Coloured City

Petra – a UNESCO World Heritage Site – is Jordan’s foremost tourist attraction and for that reason, the discerning traveller needs to abide by certain rules. If you want to follow the conventional route via the famous al Khazneh (The Treasury)immortalised in Indiana Jones and the Last Crusade, then onwards towards the Theatre, be prepared to share it with all manner of tourist groups from China (small and diminutive), Japan (masks compulsory), the good old USA (usually old and overweight) and all manner of countries from the New World Order.

Most are clearly unprepared for the length and steepness of the walks, either in fitness or in foot apparel, with many in flip flops, Wellingtons or high heels. The local Bedouins pursue them mercilessly trying to sell donkey, horse or camel rides or ancient trinkets and coins, and of course postcards. Where you from? One Dinar! and Take Look plees seem to be the only phrases that many of them know.

The tourists follow a preset route posing for photographs all the way and only stopping for drinks or toilets before attempting the long road back. Many give up and take to the horse drawn carts that bounce them up and down on the cobbled streets as their drivers use any means possible to cajole them to move.

If on the other hand you want to escape and sample the sheer magnificence of this place, then it’s vital to invest in some good walking shoes and to climb to places where the average tourist would not dare to venture.

Walking the Ancient Routes of Petra

The route to ad Deir (The Monastery) takes almost 1 hour climbing up the steep cobbled way to the top. The climb is somewhat arduous and you need to be careful to avoid the donkeys charging down the paths toward you. It is, however, well worth the effort. At the top is a beautiful Nabatean temple carved out of the rock face with its beautiful façade measuring 45 by 50 metres. If you’re energetic enough, you can scramble up the side of the monument and emerge on its roof and look down precariously over the plains beyond and the main tourist sites in the valley below.

To really sample the beauty and tranquility of the site, however, it’s good to stay overnight, to rise early before the crowds gather and to head upwards near the Temple to the High Place of Sacrifice or al Madhbah in Arabic. The circular walk takes around 3 hours but the views are stunning, especially from the top. The route up through Wadi Mataha follows the ancient processional route and you follow a cobbled stairway carved out of the rock face and hugging the steep sides of the Wadi. The site was not for the sacrifice of humans but for offerings of animals to the Gods, and was a very important religious facility for the Nabateans.

A History Once Obscured

The route down through Wadi Farasa is also spectacular and the steep path descends through deserted monuments and tombs only recently rescued from the shifting sands that obscured this site for hundreds of years. One of the most important is the Lion’s Fountain carved into the rock face that once spewed water to the city centre below.

It is the sheer scale of the site that is overwhelming and the fact that it was hidden for so many years. If it had not been for the adventurism, cunning and audacity of a Swiss explorer, Johann Ludwig Burckhardt, masquerading as an Arab trader by the name of Ibrahim ibn Abdullah, it would have been lost to the world for much longer.

To wander peacefully over the mountains looking down on this ancient site is to be transported back in time where desert caravan routes dominated trade in the region, where the camel was the dominant means of transport and where Nabatean culture reached its zenith before succumbing to Roman occupation and the ravages of time.

This article originally appeared on viator.com