In the high season, Venice’s population doubles and the log jam on the main thoroughfares becomes almost unbearable, as thousands of tourists clog the alleyways between the Rialto Bridge and Piazza San Marco. A short walk over the Ponte dell’Accademia crossing the Grand Canal, however, provides an escape route into one of the most enduring and increasingly fashionable districts of La Serenissima, Dorsoduro. Somewhat euphemistically translated as ‘high ridge’, it juts out from San Polo and lies to the South of San Marco with its tip almost opposite the Doge’s Palace. It also embraces two islands across the canal to the south, Giudecca and the less fashionable, Sacca Fisola. 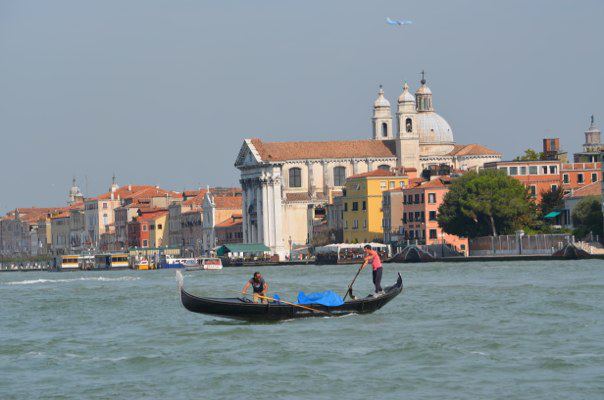 What I adore about this district is its bohemian atmosphere, its relative tranquillity and its mix of students congregating around the campos near the University at Ca’ Foscari and locals relaxing outside the osterias and wine bars in the early evenings. Restaurant prices are much lower than those across the Grand Canal, service is much more cordial and the ambiance is friendly and unassuming. Stroll along the Fondamenta Nani next to the Rio di San Trovaso in the early evening and you will find locals and tourists congregating around the Cantina del Vino gia Schiavi and the smaller Al Squero sipping prosecco or spritz and sampling the crostinis, cichettis, rosettas and paninis. Nearby the Gelateria Lo Squero serves up its speciality pistachio gelato; recently Angelina Jolie herself was seen sampling the local ices there.

A short walk away is the waterfront, Fondamente Zattere stretching all the way from the Maritime port to the church of Santa Maria della Salute (La Salute) at the tip of Dorsoduro guarding the entrance to the Grand Canal. Fish restaurants, bars and cafes look out over the Canal de Giudecca and the luxury hotels, home to the rich and famous on the island opposite during the Venice Film Festival. Vaporetti crisscross the canal and occasionally huge cruise ships ply their way slowly towards the lagoon towed somewhat precariously by fleets of tugboats. If you are in need of refreshment, sample the gianduiotto ice cream with its lashings of chocolate and cream in one of Venice’s oldest and most famous gelateria, Nico’s near the Ponte Lungo.

Nearby, at Santa Maria della Visitazione, look out for the lion’s head, bocca di leone, embedded in the church’s wall. The Doges wanted to encourage Venetians to denounce people who had committed crimes without fear of retribution and letters were signed in front of a witness then placed in the lion’s mouth surreptiously. If the crimes were deemed serious enough, the accused was arrested and tried. More often than not, however, it led to wrongful imprisonment and endemic paranoia and suspicion especially at times of plague.

Dorsoduro is also the home to last remaining boatyard for gondolas in Venice and you can watch the squeraroli plying their centuries-old trade next to the San Trovaso church in Lo Squero. Gone are the days when some 10,000 gondolas monopolised transportation in Venice and today only 425 licences are issued for the whole network, with many handed down from father to son and new recruits having to pass an extremely arduous exam. The gondolas are built to precise specifications, painted the regulation black and made from 280 pieces of eight different types of wood. At the prow is an iron stabiliser, made of six metal combs (pettini) that represent the six sestieres, or neighbourhoods, that comprise Venice. The posterior pettini represents the island of Guidecca.

Until recently, the gondoliers were all male but in 2010 a mother of two, Giorgia Boscolo, became the first female to take up this trade. If you fancy a gondola ride, however, beware since they do not come cheap and cost €80 for 40 minutes (€110 after 19.00) and €40 to €50 for every twenty minutes after that. It pays, therefore, to go in a group. 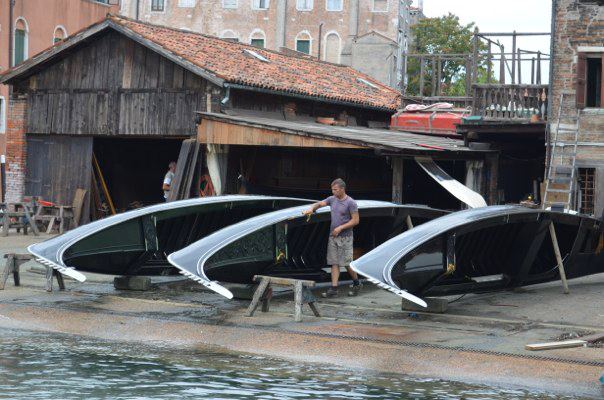 Dorsoduro also has some of the most beautiful but less frequented churches in Venice, which allows you to enjoy their solitude and charm far away from the crowds that swamp the churches around San Marco. In San Sebastiano, Veronese spent 10 years of his life painting almost every wall, the ceiling and even the organ and was eventually buried there. It is worth the visit just to see the wonderful sacristy and the magnificent paintings around the altar. You can also watch the painters meticulously and delicately retouch the wall paintings as part of the restoration programme funded by the New York-based Save Venice Inc.

Nearby, Chiesa dell’Angelo Raffaele, was immortalised by the British novelist, Sally Vicker in Miss Garnet’s Angel; and San Nicolo dei Mendicoli was used as the setting for Nick Roeg’s 1973 thriller, Don’t Look Now, starring Donald Sutherland and Julie Christie. San Barnaba was used as the exterior of the library in Indiana Jones and the Last Crusade;  and in the 1955 film, Summertime,starring Katherine Hepburn who insisted on falling into the canal herself rather than use an understudy. Unfortunately, she contracted an eye disease as a result, which affected her for the rest of her life.

In contrast to the solitude and reverence of the churches, however, the Ponte di Pugni stretching over the Rio de San Barnaba, has a much more infamous past and was the site of the War of the Fists that took place between rival gangs in the 17th and 18th centuries. These were huge fist fights numbering hundreds of fighters that were watched by thousands of spectators and supported financially by the nobility and church. They were principally between the Castellani who were shipbuilders from the Arsenale close to San Pietro di Castello and the Nicolotti, who were fisherman from the Western end of Dorsoduro near San Nicolo dei Medicoli. Although they started out with referees and some semblance of order, they soon disintegrated into all out battles where people were crushed to death or drowned in the canals. They were subsequently banned in 1705 when contestants and indeed spectators joined in with all manner of weapons resulting in many deaths. 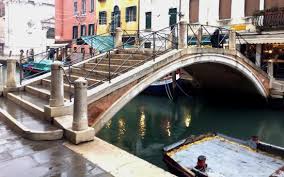 The Peggy Guggenheim Museum sitting by the banks of the Grand Canal, however, blends beautifully into its surroundings and provides an oasis of calm serenity that belies the wonders of its art collection. The gardens of the single storeyed Palazzo Venier dei Leoni are filled with sculptures yet nevertheless remain unassuming and a place to relax or even write a message to a loved one and post it on a tree donated by Yoko Ono. Inside, you can wander around galleries filled with priceless collections of cubist, surrealist and abstract art including works by Picasso, Salvador Dali, Jackson Pollock, Francis Bacon, Jean Metzinger and Hans Arp; or eat in the wonderful cafeteria overlooking the gardens.

Whilst Dorsoduro’s attraction is its ambiance, it nevertheless does possess some very important tourist attractions. The Galleria dell’Accademia, just over the bridge across the Grand Canal, is one of the principal art galleries in Venice and in Italy. Despite its somewhat unglamorous appearance, it hosts major works by Bellini, Tintoretto, Veronese, Titian, Carpaccio and has Giorgione’s pricelessTempesta. Only 180 visitors are allowed at one time, so either go early or be prepared for very long queues. Further north is Ca’ Rezzonico, built in 1648, where Robert Browning spent his last days until his death in 1889 and was also rented by Cole Porter. This is a very grandiose Baroque Palazzo housing the museum of 18th– century Venice and worth the entrance fee just to view the lavishness of the interior. 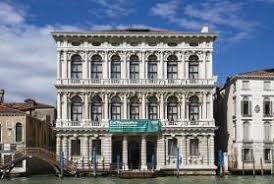 ‘La Salute’, itself is also well worth a visit. Built to commemorate the plague that swept through Venice in 1630 and took 80,000 lives, it was designed by Baldassare Longhena when he was only 26, and took 50 years to complete and required some 100,000 pinewood logs to be driven vertically into the ground to support it. Quite apart from its immense structure its interior hosts two magnificent pieces of artwork, Tintoretto’s Wedding at Cana and Titian’s St Mark Enthroned with Saints Cosmos, Damian, Roch and Sebastian.

Dorsoduro is one of my favourite districts in Venice and one that I love to explore. Its magic is its variety, its vitality and its mixture of young and old, pensioners and students, locals and tourists, workers and art aficionados. We should also not forget, however, that it also plays host to a major prison, and the inmates’ voices can be heard resonating around the alleyways near the Venice University of Architecture faculty not far from the waterfront.