If you’re a backpacker and want to savour some of the most iconic views in Venice, then there’s no better place to stay then the Ostello Venezia on the Island of Giudecca, For the price of a small meal at the nearby luxury hotels you get the same magnificent views over the canal to the Doges’ Palace, the Campanile towering over St. Mark’s Square and the cathedral of La Salute guarding the entrance to the Grand Canal. If, however, you are feeling very flush and really want to have a momentary bit of self-indulgence, then you can sample the world famous Hotel Caprice with its Olympic-sized swimming pool and hobnob with De Niro, Angelina Jolie et al during the annualVenice Film Festival, held in the nearby Lido in August every year.

Nicknamed the ‘spinalonga’ or long spine, Giudecca is only a ten minute vaporetta ride from Zattere across the canal but its proximity belies its tranquillity and simplicity. Here, you can stroll aimlessly along the Fondamenta, sample the seafood in the many restaurants scattered along the waterfront or just relax in the bars and cafes as the speedboats, vaporetti and the occasional cruiser float by. There is no sense of haste, no crowds; just an unhurried ease and a place to relax far away from the summer mayhem around the major tourist haunts across the canal.

No one is really sure of the origin of the name of the island; some say that it comes from the settlement of Jews there following their flight from the pogroms in Europe.  A more plausible view is that it derives from ‘giudicati’ meaning the judged and refers to the banishment for 9th century aristocrats who had fallen foul of the law in Venice and earned the displeasure of the Doges. Michaelangelo took up residence there for nearly a year in 1529 to escape the wrath of the Medicis and there is a street named after him at the western end of the island. Certainly, the space, the light and the distance from the crowds on the mainland would have been inspirational.

Until the 18th century, Giudecca was home to wealthy Venetians and numerous lavish houses were established there with extensive gardens. A number of churches were also built, two of which were designed by one of the world’s most famous architects, Palladio. Il Redentore was built to celebrate the end of the first great plague, which killed 50,000 Venetians in 1575-76.  If you happen to be there on the third Saturday in July, be prepared for a sudden end to the peace and quiet when a pontoon bridge is constructed across the canal from La Salute to Il Redentore and the whole of Venice turns out to cross the bridge and back to celebrate the end of the plague. The evening culminates in a gigantic firework display that illuminates the whole waterfront and the revellers on the hundreds of boats stretching across the canal. Sante Maria della Presentazione, known locally as Le Zitelle, was formerly part of a complex that gave shelter to young maidens who were considered to be at risk of becoming prostitutes and were taught music and lace making. Acquired by the Bauer group, parts of the former convent have been converted into a 50-room luxury hotel-the Palladio. Not for those on a modest budget.

The onset of Venice’s industrial revolution in the 19th century had a dramatic effect on the island. Not wanting to see La Serenissima overwhelmed by factories and pollution, the authorities moved industrial activity to Giudecca and it became famous for boatbuilding, textiles, flour milling, brewing, matting and rope making. One of the earliest film studios was even established there behind the current Hilton.  The whole social mix of the island changed with the influx of workers and their families and tenements stretched along the spine of the island. The subsequent decline in the post-war period had a dramatic effect on the island, descending into a poor backwater with a few isolated islands of prosperity. Two of the city’s jails were located here and the island became synonymous with poverty. 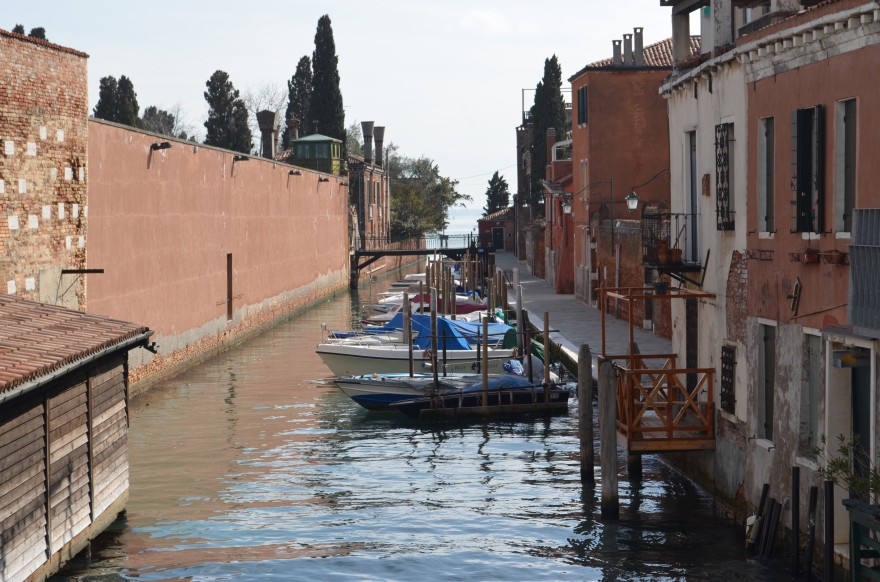 In recent years, however, there has been a major resurgence and huge efforts are being made to revive tourism and foster industrial regeneration. The former flour mill/vaporetti factory/power plant at Molino Stucky fell into disrepair following the murder of its owner, Giovanni Stucky the biggest employer in Venice, in 1955 but has been transformed into a 250 room Hilton hotel with a rooftop swimming pool.  Its Skyline bar is a must for anyone wanting to sample some of the best views in Venice and is well worth the prices charged- €14 for a spritz. It also has one of the best health clubs in Venice. The Judeca Nova complex built on the site of the former Junghans watch and clock factory has been converted into modern apartments, many of them available to let in the summer months; and the area behind the church of Santa Eufemia on the Fondamenta is also being developed into a modern business centre. There has also been a revival of the Fortuny textile factory, located next to the Molino Stucky Hilton. Originally established in 1922, the factory almost closed until its revival by its American owner, and there has now been a resurgence of interest in the unique fabric designs- carnavalet, lucrezia, de medici and moresco- and visitors can view these in the showrooms.

Even the prisons have embraced the island’s new status. Le Convertite, the women’s prison, descended into notoriety in the 16th century when Fra Giovanni Leon used it as a refuge for prostitutes only to be beheaded for using the 400 nuns as his personal harem. Until recently, the inmates had resigned themselves to a life of relative solitude and limited exposure to the outside world. If you turn up at the prison gates on a Thursday morning, however, you will see stalls set out and prisoners selling some of the best quality organic vegetables in the city. Take care if you go, however, since the locals feel that they have a monopoly of the fruits and vegetables and woe be tied intruders especially foreigners who try to usurp them. The prisoners also produce a range of toiletries ( soap, gel, shampoo, lotions) under expert supervision, market them through a co-operative and also supply the Bauer hotels. They also produce a range of clothing. Such has been the success of these ventures that the prisoners recently appeared on TV in the UK in Jamie Oliver does Venice, where the famous chef served up minestrone soup to somewhat disgruntled inmates.

Near to the Bauer Palladio hotel, the Casa de Trei Oci built by the famous Spanish painter, Mario de Maria, has been transformed into a multi-purpose venue and recently hosted a major photographic exhibition by the eminent American photographer, Elliot Erwitt. With its distinctive gothic architecture, its iconic pinnacles made from istrian stones and its unique ‘three eye’ windows, it is a venue that aptly serves the arts very well.

Venice can be an exhausting city at the best of times and the peak season in July and August can be unbearable. An escape to Giudecca, even for just a few days, can be a welcome relief where you can stroll along the waterfront, indulge in one of the local delicacies or have a leisurely meal in one of the many restaurants lining the waterfront. If you want to splash out to eat, there is Harry’s Dolci, between the vaporetto stop at Palanca and the Molino Stucky Hilton. Whilst somewhat cheaper than its namesake near San Marco, prices are nevertheless in the range of €55 per head excluding wine for the set menu. Alternatively, if you are a on a more limited budget, there is the Trattoria do Mori and the snack bar  ‘La Palanca’ serving reasonably priced meals. There are also numerous local shops including an extremely good fishmonger, an excellent baker and a wine shop serving directly from the barrel.

Alternatively, if you find the heat suffocating, the public baths on Sacca San Biagio just over the bridge from Sacca Fisola offer a respite and allows you to sample the markets nearby in San Gerardo Sagredo. Failing that, it is a short vaporetto ride to the beaches of the Lido and the Adriatic; or to the nearby island of San Giorgio Maggiore with its magnificent cathedral and campanile, where the views over Giudecca and La Serenissima are magnificent. Fortunately, there is a spacious lift to the top.